I'm excited to announce that I've have begun two new turntable builds.  One is an Acoustic Research (AR) XB which will be given an updated arm, Brazilian cherry frame, a few minor tweaks, and a lot of cleaning.  The other will be a combination of Thorens motor and platter, a custom after-market tonearm, and a nice flamed maple slab I ran across recently.


The AR XB has a three point suspended sub-chassis which I will be modifying to ride on sorbothane bushings instead of the metal springs.  It will no longer be adjustable, but will retain all of the original vibration dampening and isolation properties.  The weakness of the original XB is that over time the springs wore out and caused the suspension to sag creating an overall "mushy" experience.  The original tonearm is being replaced by a much newer AR tonearm from one of their "The Turntable" models.

The other turntable is a fully custom build that will be very similar to the Thorens TD-316 that I rebuilt last year and use daily.  It will retain the electrical system, motor, and platter from a Thorens TD-150, with custom isolation and dampening, and then be given an Acos Lustre GST-1 tonearm.

I've been waiting for an opportunity to use this arm in a build and am excited about the aesthetics and performance that it will bring to my new turntable. 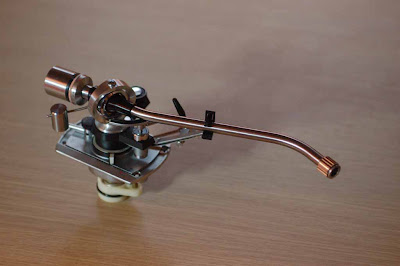 More to come as these two turntables progress.